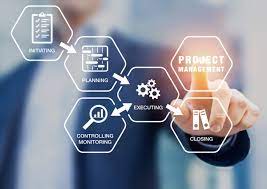 Project Manager Roles in an Organization

A single-line-of-command organization is whereby individual report addresses their concerns   by addressing them to a senior manager of a particular section or department. The manager in such organization does as directed by the supervisor. Employees used to such structures find it difficult to work with more bosses at a time because; decisions are delayed, as it requires more time and negotiations.

In this situation, Jim should negotiate with the functional team manager to make the two-team members available at the right time and if the negotiation fails, then he will have to work with the available members later. This is because, hurrying the project to solicit the service of the team members will be a risk to the project as it may not be handled well. Therefore, I would rather he use other members who will also be having skills in the areas to handle the tasks in the 7th or 8th or 9th month.

This relates to Maslow’s hierarchy of need because, they are worried about their physiological needs such as food and clothing. They must therefore look for another alternative that will enable them achieve this. They are also insecure as the job is ending. The project manager should therefore, assures them that they are secure and that there will be another project to do. They should also be well paid o be able to cater for their needs even if they are not going to have another immediate project.

To ensure that the engineer works well with other members, as a project manager, I will make him through negotiation to understand the policy of an organization at his time of employment. He will also be told the importance of working as teamwork. In case the engineer persists in working as a loner, I will not fire him immediately but will try to talk to him and as well assess his performance. If he performs well without affecting the functions and operations of the team and the organization, he will not be fired, but given more time to learn to work with others.

In this situation, Alice should just comply with this situation. To me, it is not a bad situation because, the most important thing is to handle the project and finish it as required. Other things concerning the project do not hold water. I would therefore, prefer this style of management because, it is straight to the point and will ensure that projects are finished in the right time.

It is possible for a project manager to improve his time management skills. Time is a valuable resources and it requires proper planning. A good manager must have these skills to be able to handle his or her responsibilities well (Pothukuchi, 2008). A project manager that has time management skills will have time for his employees or team members and this will allow him o understand their needs and therefore be in a position to devise various strategies to motivate them. Therefore, it is good skill and managers ought to have it.