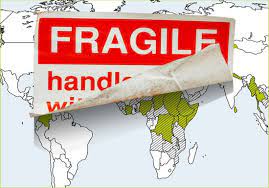 Fragile states can be characterized by an ineffective government which places its citizens in danger due to lack of security, services, and sound decision-making capabilities.  In addition, these fragile, or “failed” states experience economic disparity, corruption, and impending violence which threatens the safety of nationals within their borders, forcing many to flee as refugees to other parts of the world.

Examples of fragile states include South Sudan, Somalia, and the Central African Republic, all countries where governmental upheaval, economic uncertainty, and acts of violence endanger lives and global interests.

Weak national government institutions contribute to the perpetuation of fragile states.  In countries where governances provide structure and guidance for their citizens, in the form of balanced legal guidelines and stable leadership, fragility is not a major concern. However, in nations where national leadership is weak, transitional, or corrupt, fragile states can emerge.

Another major causes of fragile states is political fragmentation. This division between factions undermines the stability of the country, with national identity withered and governances dissolved. In a politically fragmented state, power most often rest with small insurgent groups which use violence and corruption to control nationals.  Also, the desire to control natural resources in a particular area can fuel fragile states.

These resources, such as oil and water, are not in themselves the impetus for the creation of a failed state, but serve as an incentive for those in control to gain wealth, status, and power over others in the fragile state and surrounding areas.

The impact of fragile states can be felt within the country of interest, as well as regionally and globally.  From the perspective of the fragile state itself, governmental instability can result in corrupt courts, biased property rights, lack of trust in national institutions, and decreased legitimacy with respect to other nations.  Of particular concern among fragile states is the impact this scenario has on poverty. The instability and ineffectiveness of failed state leadership falls short in terms of aid and social reform for their citizens, compounding the problem of poverty and malnutrition in these countries.

Regionally, the problems associated with fragile or failed states can seep over borders, causing unrest in neighboring countries. These negatives impacts to neighboring nations can include armed conflicts, limited resource accessibility, and impending governmental or political instability. In addition, neighboring countries may be inundated with refugees fleeing a fragile state, placing economic and social stability in the balance. The displacement of refugees from fragile or failed states is also a global concern.

The recent global dispersion of Syrian refugees is a prime example of the international impact of fragile states. In addition, fragile and failed states are associated with the harboring of extremist and terrorist groups which threaten the global community.  Fragile states can also endanger global health by exacerbating the spread of disease through ineffective governmental control of social and economic conditions.

Given the impact fragile states have on the global community as a whole, the rise of these states is of utmost importance to domestic and international governmental and military leadership. As such, it is necessary to recognize specific changes in at-risk countries which may point to development of a fragile or failed state. Warning signs may include an authoritative crisis, in which a country is unable to exert power or engage existing lawful structures to control their country, resulting in coups or civil wars which signal instability and national fragility.

In addition, a nation may fall short in its ability to adapt to changing social, economic, or political challenges, emerging through ineffective or nonexistent policies which fail to meet demand. Fragile states may also arise from national legitimacy issues, in which citizens distrust the government and organize an insurgency to control state affairs. These warning signs can exist in isolation, however, they most often work in concert to create a fragile or failed state.

Want help to write your Essay or Assignments? Click here.

If you are an existing customer see your email for username and password and log in here.